My friend, owner of the Autovox car radio installed on a Lancia Fulvia from a previous article, has recently contacted me for repairing the car radio for another Lancia sedan: a Blaupunkt Bremen SQR46, to be installed on his 1985 Lancia Thema since it was the model officially sold (as an option) from the car maker.
The set was working good, both the radio and the cassette player, but had a defective LCD display and the push buttons of the tuning were loose and not working. I was also asked for a general service of the cassette player, due to blocked eject and reverse buttons.

I accepted to give a look to the set, warning that I was unsure if the restoration was possible, if I could not find the required spare parts: paradoxically, it is way more difficult to find parts for these recent radios, compared to older receivers, although newer ones were mass produced and with much bigger sales.

At first glance after disassembly, it was clear that the LCD display was damaged: the segments of the display were moving (although apparently in a casual manner) according to the button pressed, which meant that the micro-controller was sending signals to the display. Since it was very unlikely for the micro-controller to be damaged only partially and giving wrong commands, the other possible faults could only be at the decoder module (unlikely, since it was a well-built and reliable hybrid ceramic module) and the display itself. I discovered on the Internet that liquid crystal leakage was a frequent fault on these car radio, and the LCD appeared damaged on one side and at the border.

The push buttons of the tuning were moving freely due to the fact that some parts were broken, but I was nearly sure that it would have been possible to replace them with new ones.

So, the only chance to repair the radio was to find a spare part for the LCD display, or another radio with a good display to be used for parts. I found, using the German word Flüssigkristall as search term, that there were some LCD display for Blaupunkt car radio of the ’80s in German eBay and even on Amazon! Unfortunately I had to give up all hopes: checking the part number on the model I was repairing and on the schematics (8 638 852 069), I realized that none of those on sale were compatible. Despite several emails to Blaupunkt part sellers and other German car radio repairer, none had the spare part. The only exception was a repairer from Northern Germany, which had the spare part from a faulty radio, but refused to sell it separately: he wanted to have the radio shipped to the region Rendsburg-Eckernförde for the complete restoration, and then back to Italy. 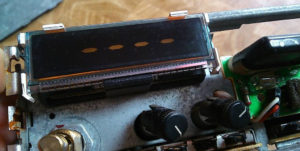 I started looking for similar radios which were not working or in bad conditions for parts. Unfortunately, the research has been very difficult since this radio was installed on some sport cars (such as 1986-89 Porsche 911, some Ferrari models), so the competition was fierce. It looked unlikely to win an on-line auction within a reasonable budget, so we posted some advertisement in few on-line markets on the other side of the Alps, including also the models Toronto SQR46 and Bremen SQR46 which had a compatible display. After few days we were contacted by two people with a defective Bremen SQR46. In one of the two cases, we weren’t certain that the display was working since the seller was unable to test it, whereas the second one was exactly what we wanted. The display turned on correctly, but was only showing some lines (as shown in the photo on the left), the car radio was dismantled and without some push buttons. The seller wanted to install the radio into a 3-Series BMW E21 of the ’80s, but gave up since he couldn’t make it working.

When I received the parcel from Germany, my guess was that the radio was probably only blocked since it required the security anti-theft code, but since it was in 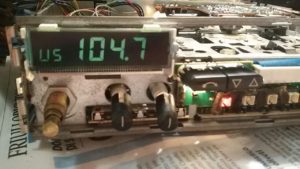 much worse conditions than the other, I preferred to replace the LCD display and leave the radio to my friend for parts, if needed.
Although the radio we bought was the same model (Bremen SQR46 on the front and on a paper tag, despite a “Honda SQR46” tag), the part number of the display was different, but still perfectly working in my friend’s radio, as shown in the photo on the right, taken just after the “transplant”.

Then I fixed the tuning push buttons which were loose, I could easily replace them with two modern ones.

The cassette player buttons had similar problem. In the attached photos we can see the steps of the disassembly of the push-button panel, with the details of the eject and reverse buttons. Unluckily these weren’t normal push buttons as those of the tuning, since they embed the LED lights and, thanks to the usual unnecessary complications of German radios, they had two small springs and a rubber stopper made by conductive material, so that the pressure of the button had two “level” of pressure, the first done by the springs, the second from the conductive rubber stopper, which was triggering a click when the contact was closed. I guess that the purpose was a better tactile feel. Of course, with the time, the rubber dried up and the rubber stopper broke, as shown in the photo.

The solution I found was to replace the rubber stopper with a lenticular spring taken from push buttons identical to the modern one I used for the tuning buttons. These needed to be adapted, glued in their place, etc. so even a small problem can sometimes take a lot of time.
This is a video where the cassette player is working (the frequency of the display is running since the radio was doing a research of the radio station, independently from the cassette player).

Once the push buttons were repaired, the radio was finally ready for being assembled and sent back to the owner for installation in his Torinese sedan.

This site uses Akismet to reduce spam. Learn how your comment data is processed.